Purchasing a firearm isn’t a one-time investment, as many of us would like to believe: a gun is supposed to be a warrior’s weapon, and only when treated with respect and care will it serve them faithfully in battle. One of the most important aspects of caring for your gun is to keep it in a secure place, where it isn’t exposed to the elements and is safe from theft and mishandling. In other words, you need a gun safe that you can count on – to this end, MESA Safe Company is one of your best bets right now. 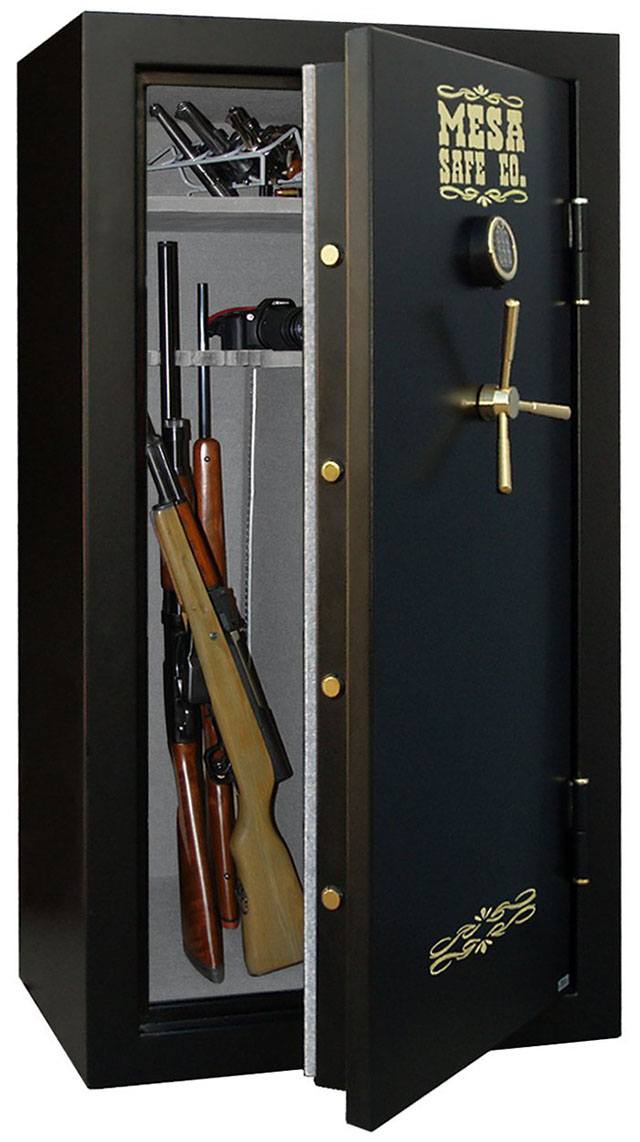 I’ve put together this guide to get you acquainted with one of the most dependable gun safe manufacturers in the market. Also included are mesa gun safe reviews to help you choose from their offerings, the one which will be most suitable for your needs.

Founded in 1981 by George L. Vincente, MESA Safe Company proudly claims to manufacture gun (and other) safes which are highly secure and do not compromise on quality. The founder worked in the safes industry as a teenager apprentice to a small locksmith, and only started MESA after he had run his own locksmith enterprise for several years.

Mr. Vincente was well aware of how locks worked, having penetrated several to test their strength legally as a locksmith. After around four decades of accumulated knowledge, he designed the MESA safe, made entirely from steel. This safe combined brute strength with a sophisticated locking system, and the end result bore considerable semblance to bank vaults – definitely a place where you can store both firearms and other valuables safely without fear of damage or theft.

The MBF series is the beefiest of MESA’s offerings, designed to protect against burglary and fire hazards. 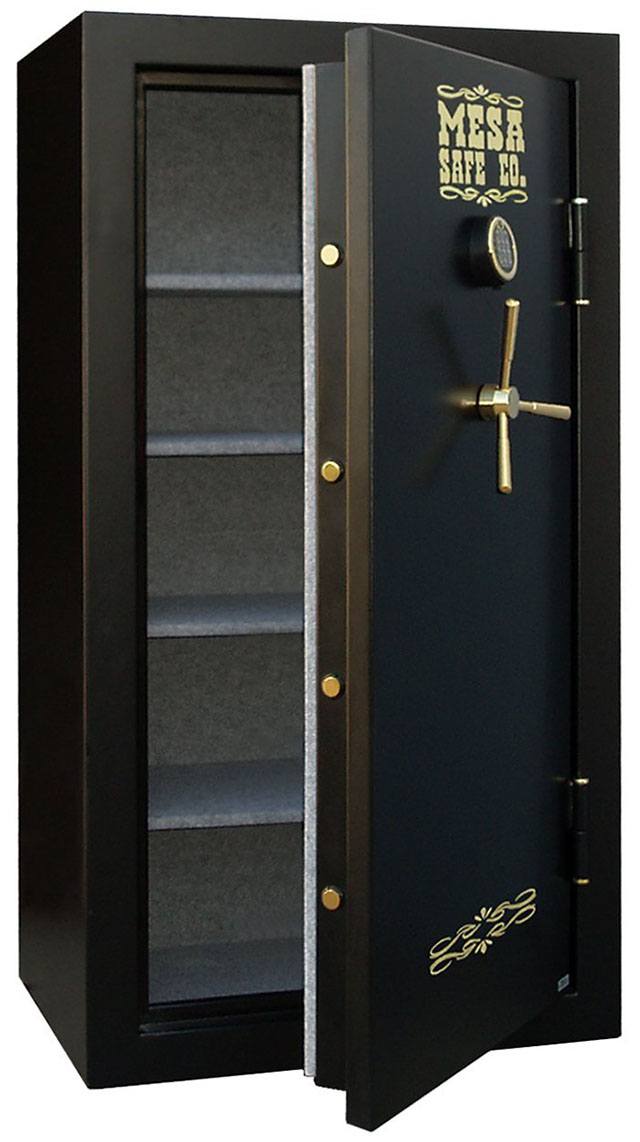 This is the lite edition of MESA’s gun safes – it offers more than adequate protection to your weapons and other prized possessions, but has some of the more extreme features of the MBF series cut down to make it more economical. Its prominent features are as follows: 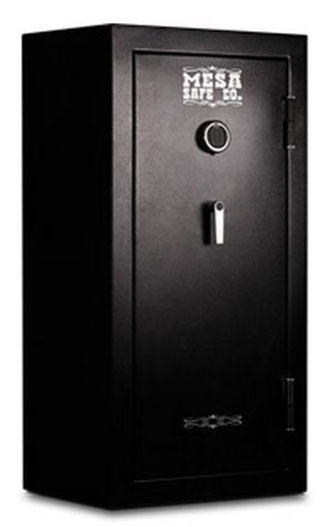 This is basically the same product as the MGL series, but has an interior focusing solely on shelved storage. In other words, you won’t be able to store longer weapons such as rifles and shotguns, but the extra shelves will make it an ideal storage place for pistols, revolvers, grenades and ammunition.

Note that instead of the electronic locks which come by default in every MESA safe, you can also optionally choose a traditional combination wheel lock for most models. However, I wouldn’t recommend this option since it is extremely difficult to operate and configure (and may even malfunction at times) – this would be unfortunate if you had dire need of your firearm in an emergency. This isn’t an issue with MESA’s manufacturing process but is a direct limitation of combination wheel locks themselves.

As mentioned before, the MBF series is the toughest product the manufacturer has to offer. The massive all-steel body of MBF gun safes gives them the ability to withstand fire hazards of up to 1750F for 1 whole hour, and to survive 2 story falls. They come equipped with MSL50 electronic locks that have both a hard plate for essential security, and a punch-activated spring loaded relocking mechanism as a backup in case burglars manage to bypass the hard plate. Furthermore, the electronic locks incorporated in MBF series safes can store 2 user access codes, for flexibility of use.

You can also opt for a combination lock model instead of the standard electronic lock one, but these will have their own issues, as mentioned before.

Depending on the exact amount of weapons you’ll need, you can choose from the following MBF models:

This safe can hold up to 14 rifles, and comes with a Personal Door Organizer space made from heavy duty material which has 2 large pockets and 12 elastic slots. The 55 3/8’’ by 18 1/4’’ by 13’’ internal storage space of this safe is divided into 3 half shelves (for storing ammunition and small arms) and 1 full shelf (for storing larger firearms). This enables the safe to provide the security of a vault to someone looking to store a moderate number of rifle and pistols, and some ammunition.

This safe can hold up to 24 rifles, and the PDO which comes built into it has 2 large pockets and 20 elastic slots. It has a 55 3/8’’ by 28 ½’’ by 15 ¼’’ interior divided into 3 half shelves and 1 full shelve, just like the 5922E, however, these shelves will be considerably roomier, allowing you to store more weapons and ammunition.

While most consumers were happy with their safes, the most common complaint from dissatisfied users was about the electronic locks, which started to operate inconsistently after a while. This may have something to do with the 9V battery running low though. A few users have also reported minor to major bodily damage to the safe upon arrival, and although most were able to get their products replaced successfully, it does indicate some shoddy quality control on part of the manufacturer. 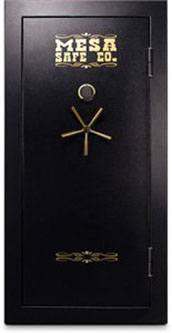 Some of us may not be able to foot the price of those behemoth MBF series gun safes – then again, not all of us require the extreme security they provide. Fortunately, MESA’s MGL series has been devised to cater to the needs of precisely this segment of consumers. Don’t let the Lite in their designation fool you – these safes may be lighter than the MBF series, but are still quite heavy in their own right. They also bear an all-steel construction, albeit to a smaller thickness, which means they’ve got a fire safety rating of 30 minutes for temperatures up to 1200F. The lower cost of the MGL series also means that the MSL5 electronic locking system isn’t backed up by a punch activated relocking system. Furthermore, you can only have a single user access code for this lock.

As with the MBF series, these safes can also optionally bear a combination lock system instead of the electronic one.

Again, MESA gives you the option to choose between three different models to suit your exact security needs:

This gun safe holds 14 rifles in its 52’’ by 18 ½’’ by 15’’ interior, which is configured into a single shelf for holding large firearms. A top shelf is also present to let you store some ammo or smaller weapons. This safe is perfect for those who want dependable, affordable protection for a small collection of armaments. 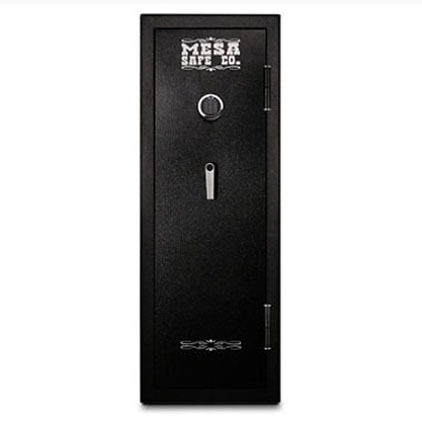 The MGL36E gun safe has the capacity to hold 36 rifles, and its 56’’ by 34 ½’’ by 18 ¾’’ interior is divided into 2 half shelves and 1 full shelf, just like the 24E model, albeit with greater storage room. This is a great choice for those who want an economic solution for safely storing a sizeable cache of arms. 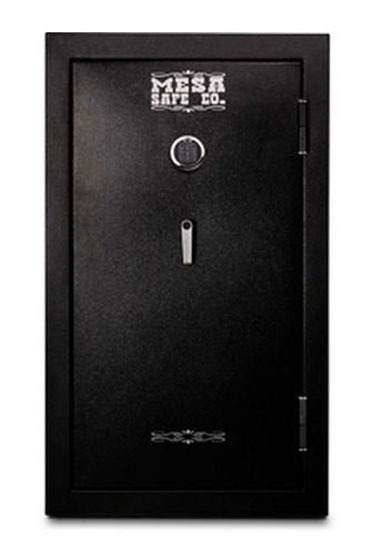 If you’re mainly interested in storing smaller handguns, ammunition and grenades, then perhaps the AS variation of the MGL series will be your best bet. It has basically the same features as the MGL series, with the exception that its interior is designed with the convenient storage of small arms in mind.

All safes in this series have plenty of shelves to accommodate several dozen such firearms; but again, depending on your exact requirements you can choose from three models with varied interior sizes: 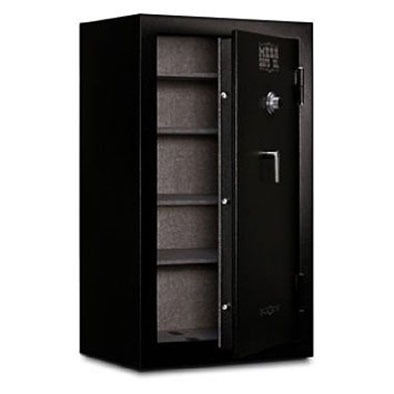 MESA safes have been pioneered by an individual who used to break-test locks professionally as a locksmith. Put another way, the safes are manufactured with the intent to thwart the intruder’s mentality. While they may have some issues with quality consistency, everything considered, they are the strongest safes around right now with their rigid strength testing and fire safety ratings. There isn’t one clear winner that can be called the best mesa gun safe on the market – having gone through the reviews of mesa gun safes, you must have realized that the best mesa gun safe will be the one which accommodates your particular weapon collection, as well as your budget.

A Look At The Top Rifle Scopes – Buyers Guide

A Guide To Choosing The Right Leupold Spotting Scope

Choosing The Best Barska Spotting Scope For You – Top 5 Reviews

How To Find The Best Spotting Scope For Your Needs

What’s the best compact spotting scope for you?

A Look At The Top Rifle Scopes – Buyers Guide

How to Stipple Your Handgun Grip: A DIY Guide